The first bulb that tinkers in your mind when you think of Milan’s economy is anorexic, high heeled models walking the ramp, in designer outfits. While this is true to some extent, Milan contributes to Italy’s economy much more than this. With the Italian Stock Exchange, Borsa Italiana positioned in Milan, one can get inkling how much the city & its metropolitan are contributing to the Italian gross domestic product. Milan’s metropolitan area has the 4th highest GDP in Europe and stands at the 6th place among other world economies.
The thumping of the Italian economy comes from Milan’s heart which includes designer names like Armani, Prada and Dolce & Gabbana. The diametrically opposite economics in Milan are a result of the educational institutes like La Bocconi economic university at one end and high end fashion empires at the other.
The designer avenues of Via Montenapoleone and Via della Spiga spell money for the economy as its here where the fashion conscious wants an Armani jackets in their cupboard.
Milan has been named as one of the Alpha world cities which are ranked according to their contribution and importance to the global economic system. 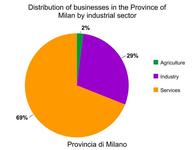 During the 12th century manufacturing armors was the main industry in Milan. Then agriculture started to gain importance which in future marked the fertile region of Lombardy. The wool trade also started developing around the same time giving the impetus for production of silk. Creation of fashion and luxury goods was of much importance even then which in effect granted the name “milaner” which was later formatted to Milan. Milaner was an adjective used to describe opulent goods such as clothing, hats, jewelry, hats, etc. The industrial revolution gave a new lease of life to Milan wherein Northern Milan went under a transformation with carriage of goods through the Alps and mills. With Asian silk being imported and silk and wine production infested with pests, agriculture took a back seat with industrialization coming in the forefront.

Today’s Milan economy is characterized by textile and garment manufacturing, automobile, chemicals, industrial, machinery, and publishing industry. The city is a base for some of the leading designers in the world like Armani, Gucci, Prada, & Versace.